MUSTANG: Journey to Lo Manthang, the kingdom of “Lo,” as Nepal's Mustang region was once known, occupies the southern fringes of the Tibetan plateau, a high and desolate country where variegated rocks, shadows of passing clouds, and a few cultivated fields provide interesting color and contrast. Long isolated from the outside world, this region is one of the few places in the world that until only recently was inaccessible to outsiders. This isolation has helped maintain a way of life almost unchanged for centuries. Culturally and historically very close to Tibet, Mustang was an independent feudal kingdom with strong monastic traditions, and thrived on its control of trading routes connecting Tibet with Nepal and the Indian plains. When Nepal opened its borders to tourists, trekkers, and mountaineers in the early 1950s, political events to the north caused Mustang to remain isolated. The revolution in Tibet caused trade routes to be closed, and Mustang, along with other remote spots along the northern Himalaya, became an area of conflict between the Tibetan resistance movement (predominantly the Khampas of Eastern Tibet) and the Chinese military. 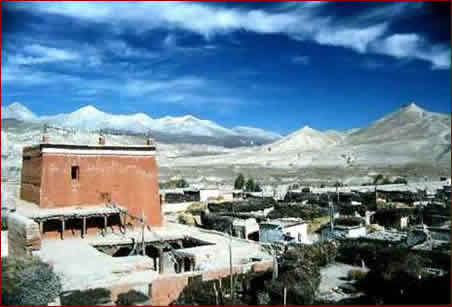 This came to an abrupt halt in the late 1970s when the Chinese persuaded Nepal to stop allowing this activity and the U.S. government withdrew its active support for the Tibetan resistance movement. In February 1992, the democratic government of Nepal, in agreement with the wishes of the people of Mustang, opened the area to a limited number of tourists, and the revenues from special trekking fees finance some development projects. Join us on our journey to this once “forbidden” kingdom. Our trek begins with a flight to Jomsom (8,898'). Heading higher, we climb a series of canyons, ridges, and passes, and discover caves replete with magnificent religious statues and ruins of old forts before entering the ancient capital city of Lo Manthang, untouched since the 14th century. As you make your way through this secluded land, you’ll pass brightly painted chortens (Buddhist shrines) and tiny villages guarded by enormous monasteries. Vistas include unusual and arresting views of the snowcovered  Himalaya to the south, and desolate high plateaus, deep canyons, and an ocean of windswept hills the colors of a desert sunset to the north.

DAY 1: ARRIVE IN KATHMANDU. Arrive in Kathmandu Yama Adventures representative will meet you outside the customs and immigration area at the airport and escort you to your hotel. Afternoon briefing regarding trek arrangements and a general orientation to Kathmandu. Vajara Hotel

DAY 2: KATHMANDU – POKHARA. We visit Bhaktapur and Patan. Morning tour of Bhaktapur, which has preserved its ancient character and does a wonderful job of displaying medieval Nepalese town life. In the late afternoon, we fly to Pokhara (909m/3,000ft'), a lively town set beside Phewa Lake with fantastic views of the Annapurna Range. (B)…Hotel Phewa Resort 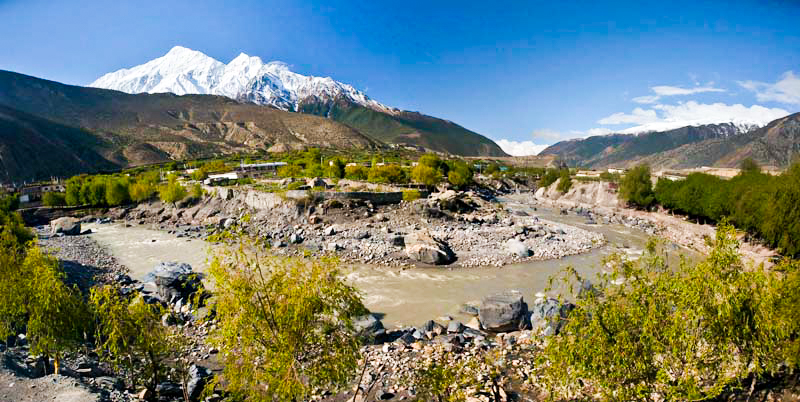 DAY 3:  JOMSOM – KAGBENI. (2793m/9,217') We take an early morning mountain flight (weather permitting) from Pokhara up the Kali Gandaki Gorge between the peaks of Dhaulagiri (26,788') and Annapurna (26,538') to land at the small airstrip at Jomsom (2696m/8,898ft), After we disembark, meet the Sirdar and crew the porters, Sherpa guides, and pack animals for the trek. We begin hiking along the bank of the Kali Gandaki River, passing through Eklebhatti (9,046') to the medieval-looking village of Kagbeni , The arid climate, mud-walled houses, and Tibetan dress and language are indications of how closely this area is linked with Tibet. (3-4 hours hiking.) (B,L,D)…Camp

DAY 4: CHELE. (3011m/9,938ft') (7 hours) we go through the police check post. After that we pass the sign saying “restricted area” and enter the forbidden kingdom of Mustang. High water often dictates a high trail on the east bank of the Kali Gandaki to Tangbe (9,610'), where we have our first views of the uniquely colored chortens and architecture found in Mustang. We continue to Chhuksang (9,578'), which is at the confluence of the Kali Gandaki and Narshing Khola. Heading north we cross the Kali Gandaki and a short climb brings us to our campsite at the large Tibetan village of Chele. (B,L,D)…Camp

DAY 5: GELING. (3578m/11,808ft) (8-9 hours) we climb up to Samar (10,791') on a good trail that is not unlike the hike winding up and around from the bottom of the Grand Canyon. Samar is a trading post–type oasis  in poplar trees amid the arid landscape of Mustang. We have an early lunch then a four-hour afternoon hike with three high ridges to ascend, the highest one at 12,464 feet. We pass some teahouses at Shyangmochen (11,972'), then continue to Geling. This day  is possibly the hardest day of the trek. (B,L,D)…Camp

DAY 6:  CHARANG. (3498m/11,546ft) (7-8 hours) Cross the 12,956-foot Nyi La pass (the highest point on this trek) and descend to the village of Ghemi (11,283').After lunch we cross the Dhakmar Chu River on a suspension bridge, pass one of the most impressive and longest mani wall in Nepal, climb another high ridge of 11,808 feet, and enter the ancient town of Charang. Note the fivestory dzong (fortress), formerly the home of the kings of Mustang, and the vast red Dorje Dhen Gompa as we pass through the picturesque entry portal. We will visit the monastery and fortress later in the evening. (B,L,D)…Camp

DAY 7: LO MANTHANG. (3756m/12,398ft) Today we  descend to cross the Charang Chu River and climb to a ridge. We then hike through a desert-like landscape to climb again to a ridge at 12,628 feet from where we get our first view of Lo Manthang, We descend for a while and then a short climb brings us to camp. (B,L,D)…Camp

DAY 8: LO MANTHANG. A day to explore Lo Mangthang, including visits to two important monasteries built in the early 15th century. Thugchen Gompa has very fine Buddhist murals on the walls of its massive assembly hall, which is supported by huge wooden columns. Champa Lhakhang contains a fifty-foot-tall image of Maitreya, the future Buddha, making it the largest clay statue in Nepal. Both monasteries are restored now by a team of Conservation Architects and Wall Painting Restorers with the help of the American Himalayan Foundation, who funded the project. We also visit the Choedhe monastic school and the imposing four-story Raja’s palace (if he is in residence). The current Raja can trace his ancestry back to the first king of the late 14th century, which suggests Lo Manthang dates back to that period. Note—The PBS series Nova has made a documentary called The Lost Treasures of Tibet. The movie serves to make people aware of Mustang and the restoration projects of this fragile area. (B,L,D)…Camp

DAY 9:  TREK TO GHEMI. (3419m/11,283ft) we take a high loop southwest and have lunch outside Ghar Gompa . Ghar Gompa is the oldest active monastery in Nepal, dating back to the 8th century. It is also being restored with the funding of the American Himalayan Foundation and well worth a visit. From here we climb to a ridge and descend through a spectacular series of red rock formations at Dhakmar (12,300'). We continue to Ghemi to camp, one hour beyond Dhakmar. (7-8 hours hiking.)(B,L,D)…Camp

DAY 10: SAMAR. (3270m/10,791ft) We re-cross the Nyi La pass and descend steeply, bypassing Geling, to Tama Gaon. Rejoining the main trail here we continue to Shyangmochen for lunch and over three passes to Samar. (6-7 hours hiking.)(B,L,D)…Camp

DAY 11: KAGBENI. (2793m/9,217ft) (6-7 hours) Retracing our steps we follow the trail to Chele and cross the Kali Gandaki River. Return to Kagbeni, passing through the villages of Chhuksang and Tangbe. (B,L,D)…Camp

DAY 14: KATHMANDU. we’ll have a morning tour of the Hindu shrines at Pashupatinath on the Bagmati River and the large Buddhist stupa at Bodhnath, center of the Tibetan Buddhist culture in Kathmandu. The afternoon is free to relax or do some last minute shopping or sightseeing on your own. Farewell dinner with the group at a local restaurant. (B,D) Vajara Hotel 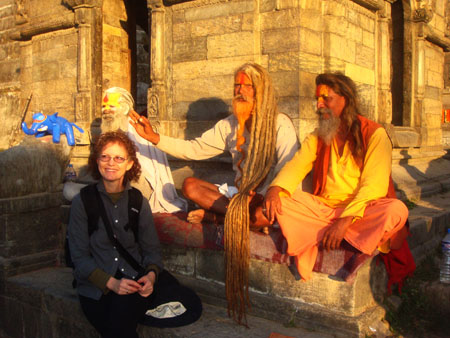 
IMPORTANT TREK NOTES:
Whilst every effort is made to keep to the above itinerary, clients will hopefully appreciate that this is Adventure Travel in a remote mountain region. There will quite likely be changes to the itinerary in terms of anything from on-the-spot choice of campsite to when a rest day is taken. Weather conditions, road conditions, vehicle breakdowns off the beaten track, local availability of horses or yaks, can contribute to the need for changes. The Trek guide will do everything in his power to see that you are inconvenienced as little as possible in such circumstances. Timings are approximate.