Ladakh is also known for the festivals celebrated each year. One of the important festivals amongst them is the Stok Guru Tsechu Festival in Ladakh. As per the Tibetan Calendar, it begins on the 9th and 10th day of the 1st month of the year. The Buddhist community of Leh-Ladakh shows an immense faith in this festival. Two oracles appear during the festival. They are usually laymen from the same town. Monks prepare them by various means to receive the spirits of the deities. People of this area strongly believe the forecasts made by these oracles. "Masked dances" make this Stok Guru Tsechu Festival worth watching. The priests of Spituk monastery in Ladakh perform these dances. This festival shows a striking contrast compared to other festivals since local people are involved. 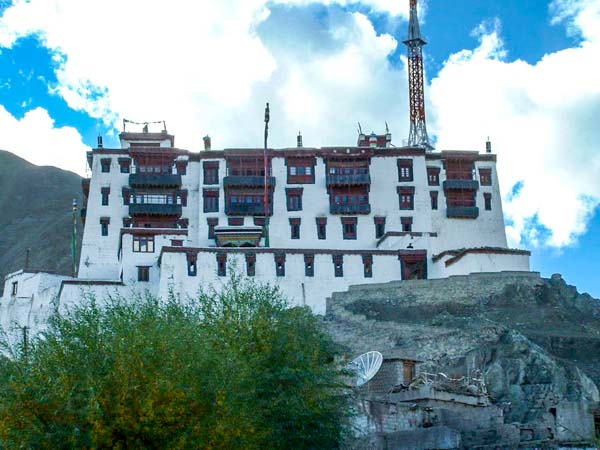 DAY 1: ARRIVE IN LEH.  After an early morning flight over the Himalaya to Leh, transfer to your hotel for rest and acclimatization. In the evening we make a gentle visit to the Shanti Stupa which overlooks the Indus valley. We will be here for sunset. Overnight in Leh (hotel).

DAY 2: VISIT ALCHI AND LIKIR . After breakfast, we drive to Likir and visit the Likir gompa situated atop a windy cliff overlooking the beautiful village of Likir. It was founded in the 12th Century, although the present construction dates back to the 18th century, as the original one was destroyed by fire. In its courtyard is a yellow-colored 3 story high mammoth statue of the Lord Buddha, which was constructed by a resident monk. The top floor has an impressive museum containing old thangkas and weapons used many centuries back. Then we drive and cross the River Indus and reach Alchi, Ladakh's most loved monastery. Over a century old, its wall paintings are very similar to those of the Tabo gompa in Spiti, Himachal Pradesh. Unlike other monasteries which are usually on a cliff top or cling to a mountainside, Alchi is at ground level and is nestled in the shade of a garden. Then we head back to Leh. Overnight in Leh (hotel). 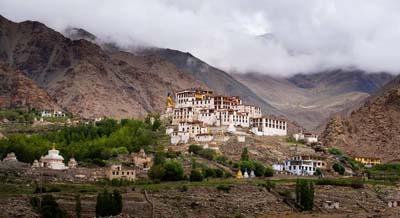 DAY 3: ATTEND STOK GURU TSECHU . On the third day you will attend Stok Guru Tsechu. The monks of Stok and Spituk monastery also celebrate the Stok Guru Tsechu for two days with mask dances performed. It is also held in February around a week before the Matho Nagrang. During the festival two oracles appear, and then laymen from the same village prepare monks to receive the spirits of the deities. Overnight in Leh (hotel). 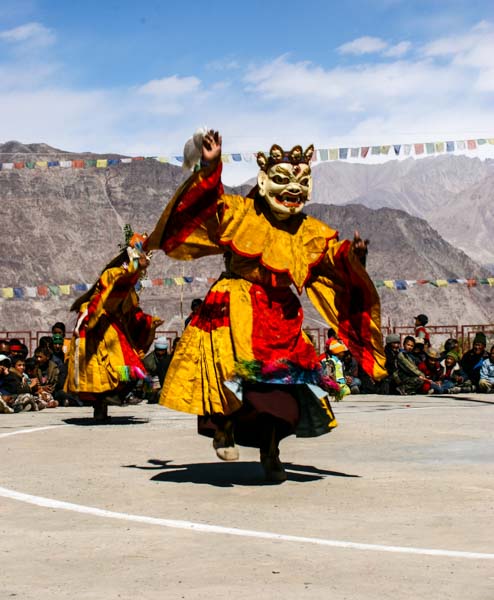 DAY 4:  SHEY THIKSEY AND HEMIS MONASTERIES. The first place of visit along the Indus valley Monastery tour is the Shey Palace. It is only 13km from Leh and is the former palace of the Ladakhi royal family. The Palace houses a 350 year old copper and gold statue of the Lord Buddha. Thiksey, a neighboring village of Shey, will then be visited. Thiksey Monastery is perched imposingly on a hillock from which its red and white buildings can be seen from many kilometers away. This Gompa is famous for its 15 meters high seated statue of Maitreya, the future Buddha. Driving further along you will reach the famous Hemis Gompa, founded in 1630 by Stag-tsang-ras-pa under the patronage of King Sengge Namgyal. In the afternoon, a visit to the Stok Palace will enlighten you about the royal family. It also houses a museum that has a rich collection of ancient Ladakhi artefacts: old thangkas, arms and armoury, royal jewellery and the crown of the King, among many others. Overnight in Leh (hotel).

DAY 5:  DRIVE TO NUBRA. To arrive in the Nubra valley, you will be passing through the Khardung La (18,380ft/5569 m), the highest motorable road in the world. From the pass, the road descends down a spectacular gorge through the Khardung village and on down to the valley floor where you can opt to camp or stay in a hotel. In the evening, you will be driven to Disket and Hunder Monasteries. Further down the river you will head towards the scenic village of Hunder, which is the home of pleasant sand dunes and the two-humped Bactrian camel. Camel Safaris are always exciting to try out. Overnight in Nubra (hotel).

DAY 6: NUBRA –LEH. After the breakfast you will drive back to leh. Overnight in Leh (hotel).

DAY 7: FLY TO DELHI. You will have an early morning transfer to the airport to catch your flight to Delhi with sweet memories and love of Ladakh.